A store in Columbia, S.C. wanted to provide the community with easily accessible, high quality products. By engaging in volunteer programs, donating to local non-profits, and helping to recycle tons of used materials and food waste, this store strives to provide a well-rounded experience for all its customers.

This Southeast US store had been issued a Notice of Violation (NOV) for trash accumulation near one of their stormwater control measures (SCMs). This store had previously chosen AQUALIS as their post-construction stormwater management contractor; however, the SCM was outside of the original preventative maintenance program and boundary map. The City of Columbia established that it was this store’s responsibility and we dispatched to the site to inspect the areas of concern. While on site, AQUALIS noticed multiple deficiencies found in and around the stormwater pond and designed a repair and maintenance plan to address each one.

Near SCM perimeter, the slope of the pond had hundreds of unwanted small to medium trees, which can cause unnecessary damage to a stormwater pond. The thick cover of tree canopy had created an environment for vagrant activity that left behind tents, mattresses, and other personal items that needed to be cleaned up for safety reasons. The canopy additionally choked out the grasses that were designed to be present by creating a carpet of pine needles. A sinkhole was also found near the outlet control structure (OCS); it was suspected that the pipe underground needed to be repaired. Without a properly working OCS, water is unable to discharge from the system and flooding can occur. 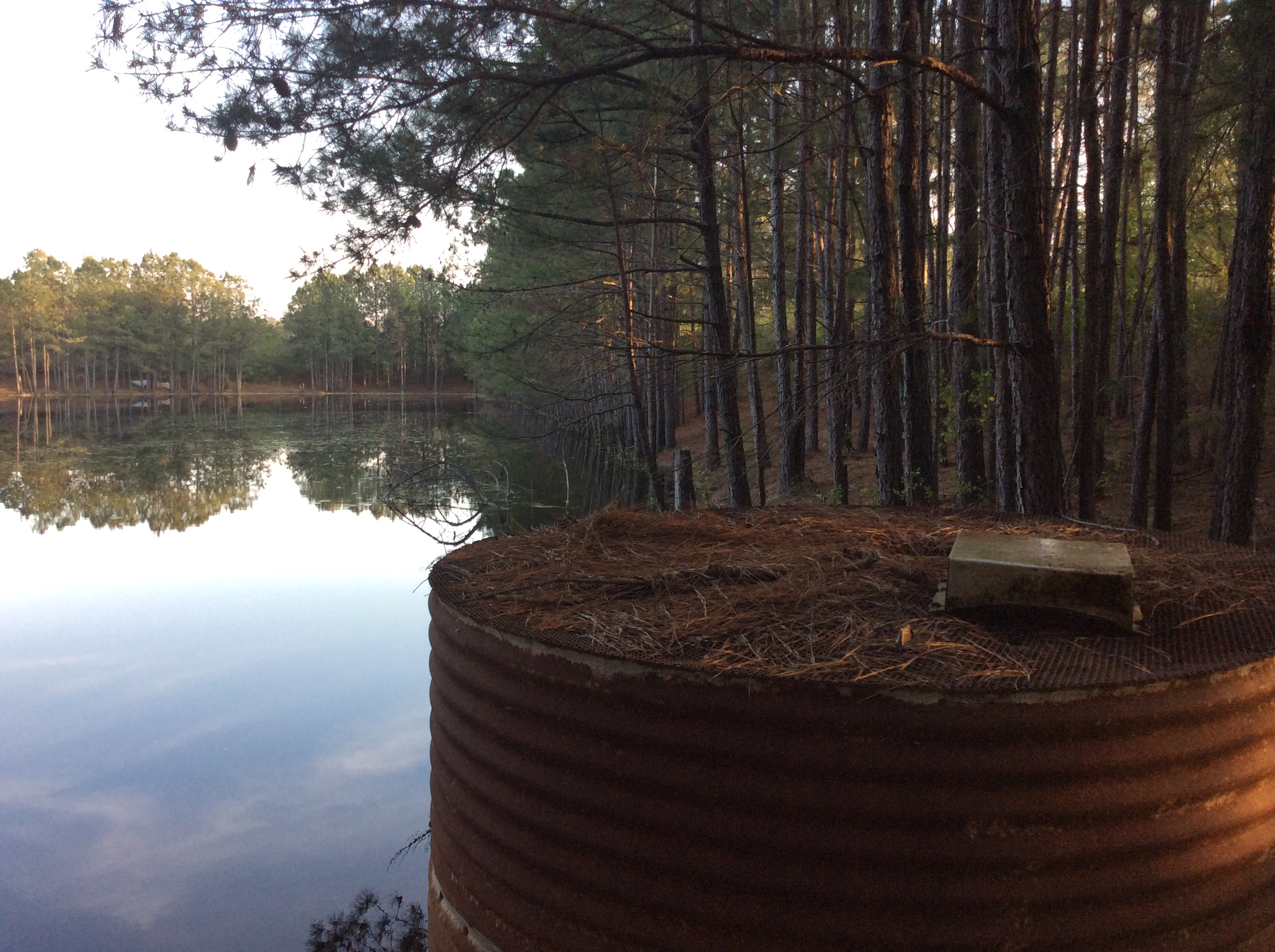 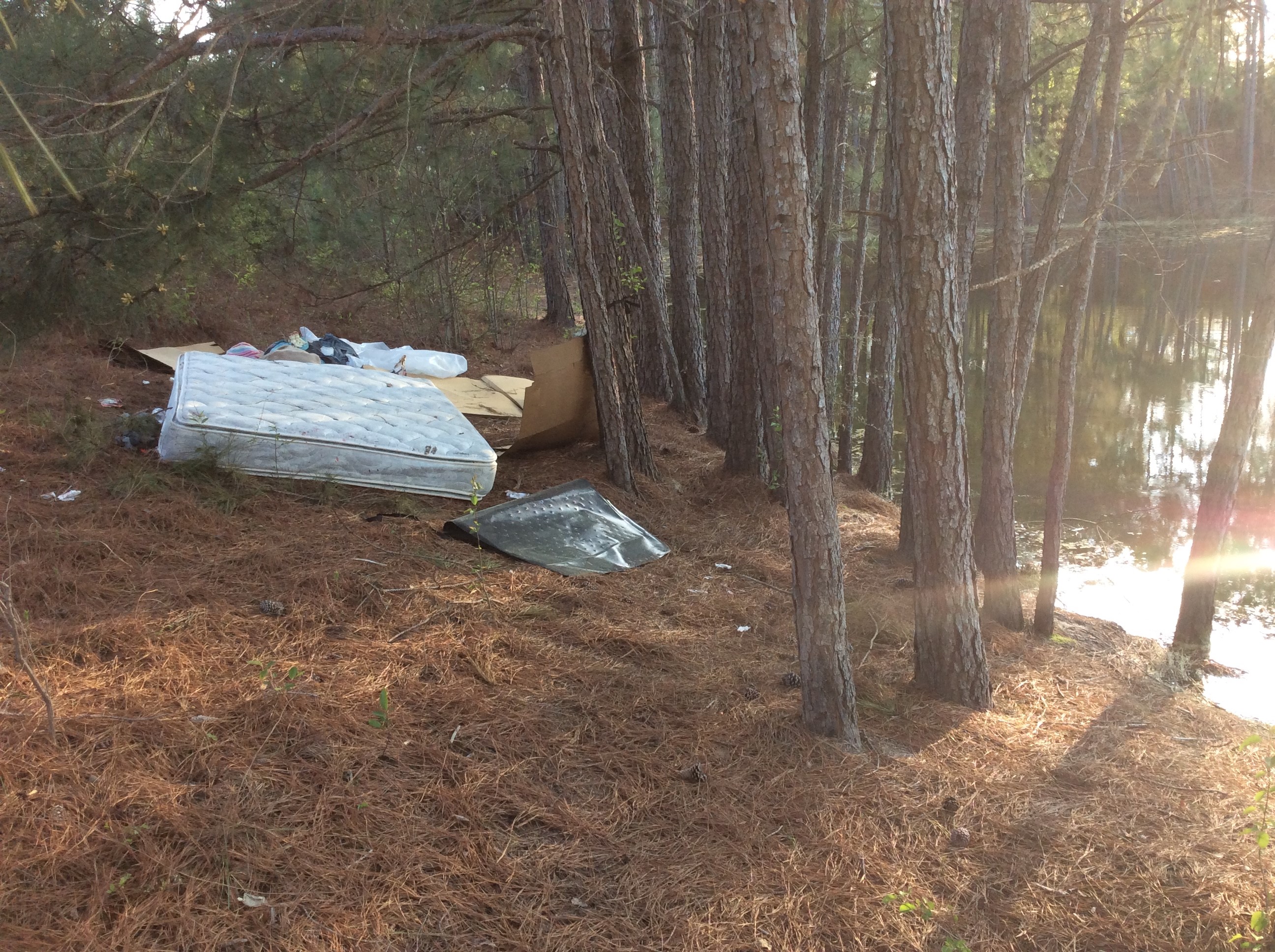 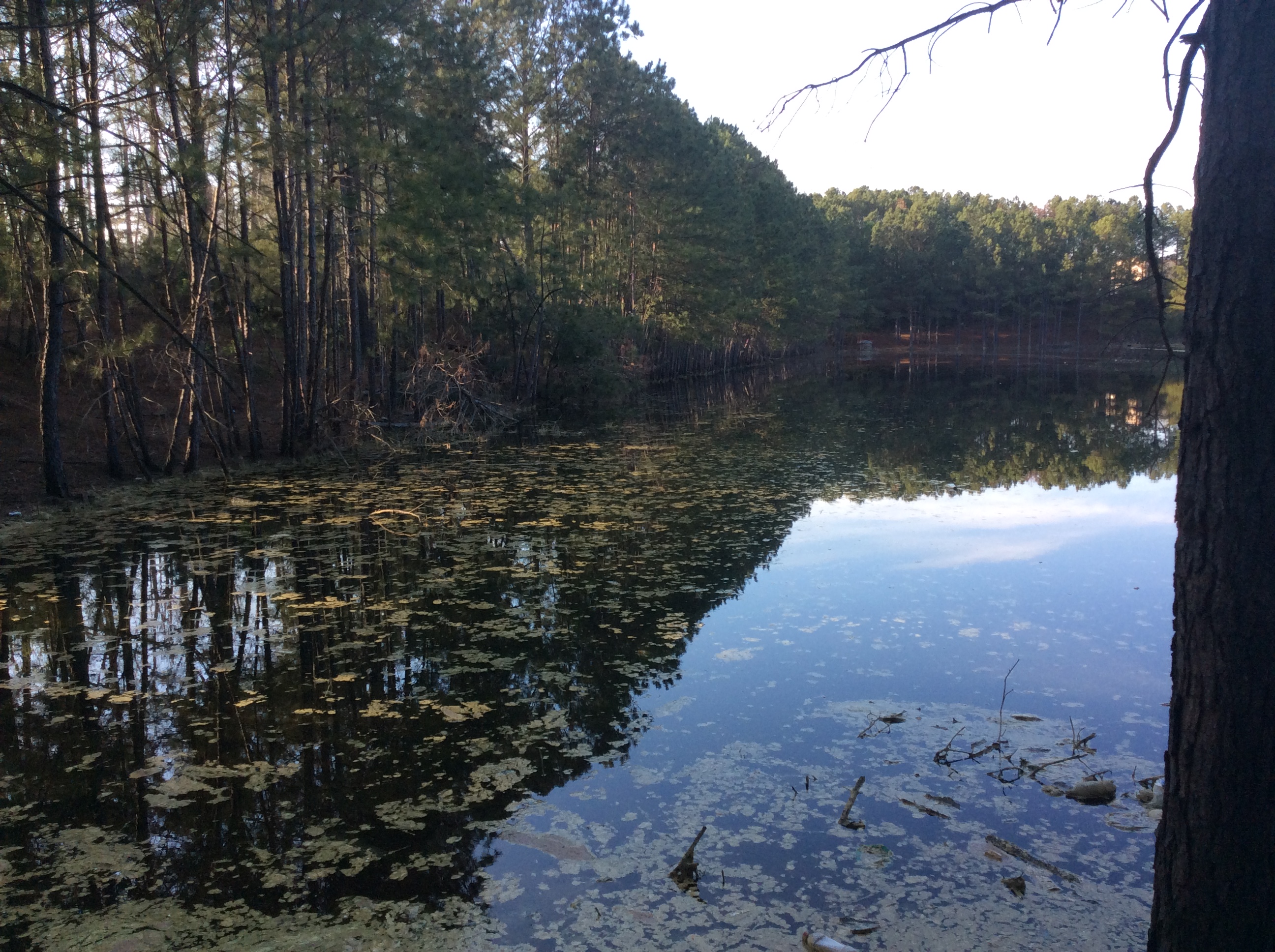 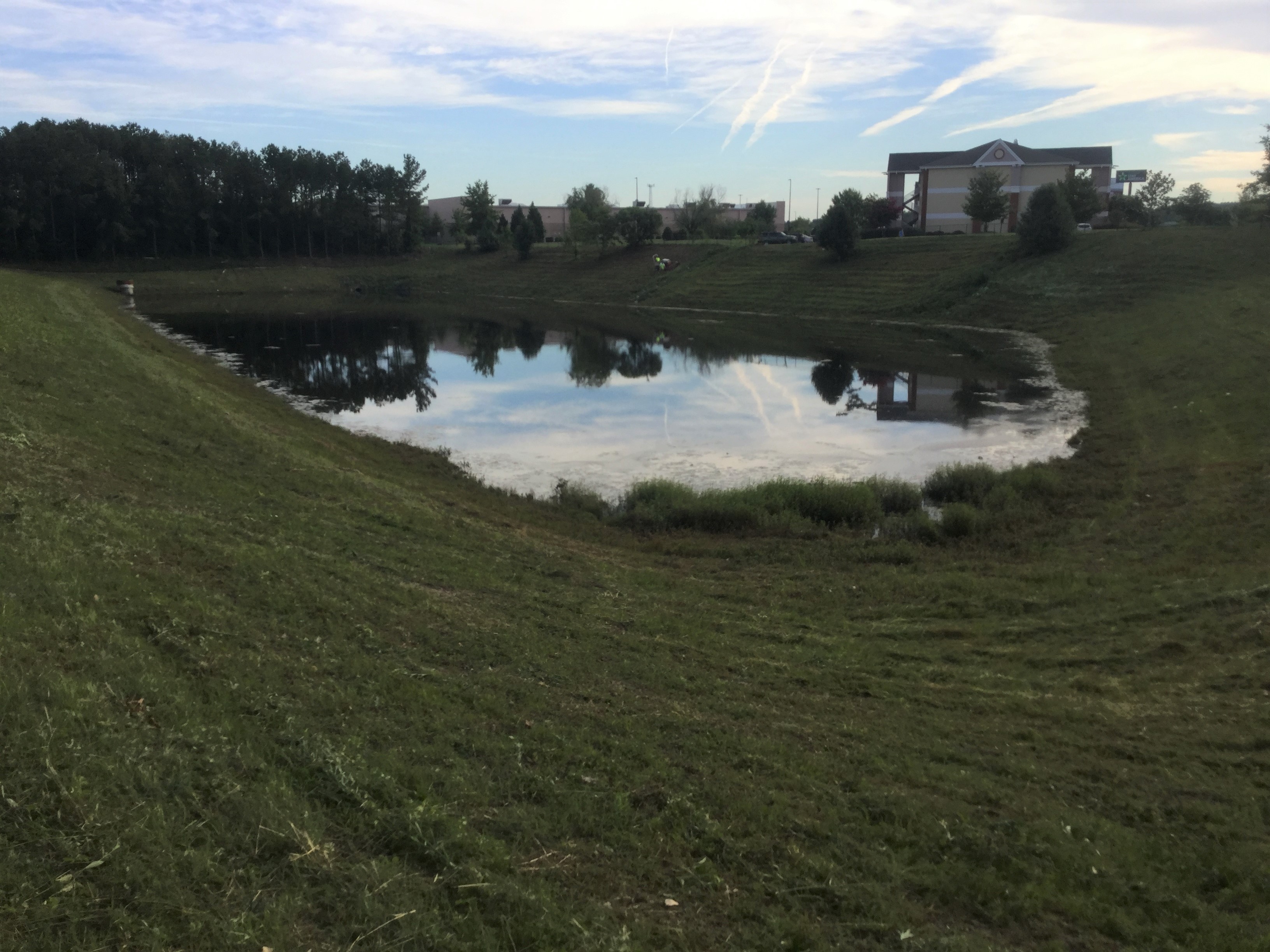 AQUALIS began by mobilizing all the equipment and labor to the site. A trash and waste cleanup was initiated to dispose of the tents and personal items that had been left behind on the property. Once the site was cleaned, stumps had to be removed by grubbing and backfilling; these methods are used to promote soil stabilization, which will prevent erosion along the slopes of this pond. Vegetation was then re-introduced by removing old pine straw and tilling the soil underneath to make room for a native seed blend. The healthy, native vegetation was implemented to promote better growth and infiltration in the soil which will result in minimized flooding; a decreased presence of nuisance vegetation will also discourage debris accumulation within the pond. Trees that were larger than 6” in trunk diameter were wood-chipped on-site and anything larger was taken off-site and disposed of in a sustainable landscaping waste facility.

To repair the sinkhole that was found near the OCS, AQUALIS first needed to expose the pipe that was believed to be damaged. By excavating down to expose the pipe under the OCS, it was evident that a durable sealant such as mortar or epoxy needed to be used for repairs. While working to repair the issue, the crew noticed that the void was created by a rotting stump that was beginning to decompose and no longer able to hold its structure. The problem was addressed by removing the root mass, backfilling, and then covering and compacting the area to grade with seed and matting to further prevent erosion around the OCS.

To protect the stormwater asset from any further damage, unwanted guests or the danger associated with no fencing, including drownings, a chain-linked fence was installed to surround the 1700-foot perimeter of the pond. This fence was composed of 4-foot tall vinyl coated metal chain link assembly, as well as double 5-foot gates with chains and locks for maintenance access.

By working with AQUALIS, this store was able to address the issue stated in their NOV and fix deficiencies in their stormwater system that could have caused major damage. AQUALIS was able to implement an effective restoration plan that resolved many of the issues that had been noted during a site visit and the site is regularly maintained by our crews to prevent future violations.