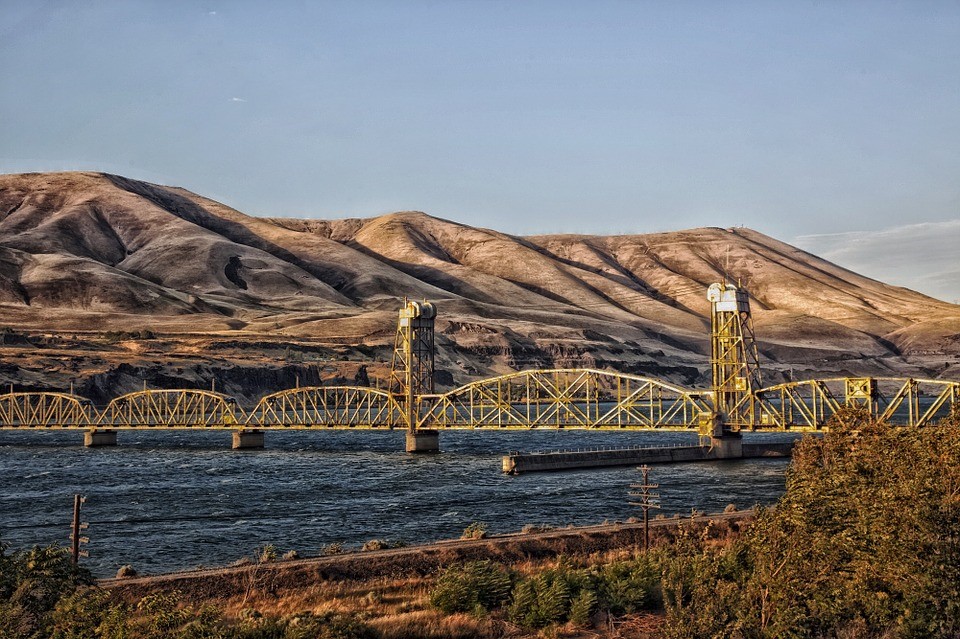 When Lewis and Clark embarked on their intrepid mission to affirm the sovereignty of the United States, one of their primary goals was to find a waterway from the US to the Pacific Ocean. The Columbia River, which today separates Washington and Oregon, defined that western passage. The climate that drives the river left a substantial impression on the expedition team, as their three-month wintering at Fort Collins (near today’s Portland) saw only twelve days without rain.

The mighty river encompasses and drains many states including the aforementioned Oregon and Washington, as well as Idaho, Montana and a small portion of Wyoming[1]. The Columbia River is the fourth largest river in North America and provides natural ecosystem services that include irrigation, flood control, recreation, and hydropower, with the hydropower alone producing half of the supply of energy in the Pacific Northwest.  The river and surrounding watershed also support a fantastic diversity of flora and fauna[2]. The water quality in the region has been subject to rapid decline recently because of many instances of use, and sometimes misuse, of the resources the river provides. Initiatives have been taken throughout the region with the goal to reduce pollution and toxins in the Columbia River.

In 2007, The Washington State Department of Ecology issued the Western Washington Phase II Municipal Stormwater Permit that combined the National Pollutant Discharge Elimination System (NPDES) and The Washington Water Pollution Control Law[3]. The permit requires five cities and 81 counties throughout western Washington to follow guidelines in this permit to manage and protect the chemical, biological and physical properties of stormwater before it enters surface waters[2]. Additionally, it encourages municipalities and stakeholders throughout the region to prevent and manage their effects on the nearby watersheds.

Despite efforts like these, the Columbia River watershed has suffered from a series of noteworthy sewage and other unknown substance spills that has unintentionally polluted the river. In 2006, the Spokane River, a sub basin of the Columbia River, experienced an unexpected spill of raw sewage into the river, which violated the guidelines of the NPDES permit[4]. In 2018, a wastewater treatment facility located along the Columbia River in The Dalles, Ore. had been accused of releasing effluent that contained levels of E. coli that are were not allowed within the permit boundaries[5]. In recent news, the wastewater facility of the city of Vancouver, Wash. dumped nearly 600,000 gallons of raw sewage into the Columbia River, and in 2019 the city was charged a $60,000 fine for polluting the river[6]. The State of WA Department of Ecology (WSDOE) has declared that they intend to help fund the city of Vancouver and improve its stormwater infrastructure and management plans to ensure that instances like this do not occur again.

Vancouver, WA: A Colorful Past, a Bright Future

Vancouver will receive up to $7 million in grant money from the WSDOE, sourced from the state’s Water Quality Combined Funding Program. The funding will incorporate new and updated stormwater systems in many cities and municipalities along the river such as bioretention systems, deep tree root treatment systems and floating treatment wetlands[7]. The program also intends to extend private facility inspections to improve pipe locating, community outreach and technical assistance[8].

Objectives include educating the public on the relationship between stormwater runoff and water quality, update permit requirements to address runoff from new development, re-development, and construction site plans, and implement stormwater maintenance plans. Public education will make business and property owners more aware of their impact to the local watersheds by including them in decision-making processes regarding development and designing public City Council workshops and stakeholder meetings. The maintenance plans will include annual inspections of all commercial, industrial, and public catch basins or inlets regularly, training programs for employees whose job functions could impact stormwater quality and implementing a stormwater pollution prevention plan. Vancouver is making headlines as they become one of the leading cities in the country to implement a stormwater management plan that will combat pollution running off to the Pacific Ocean. By executing a stormwater maintenance program, Vancouver can begin to track and capture runoff before it pollutes the waterways.

AQUALIS provides consulting and maintenance on stormwater assets for business owners and stakeholders to help protect their investment. If you have any questions regarding your business’s stormwater asset, reach out to AQUALIS and see how we can help you develop a plan.

[1] “About EPA’s Work in the Columbia River Basin.” EPA, https://www.epa.gov/columbiariver/about-epas-work-columbia-river-basin.

[4] Aleccia, JoNel, and Parker Howell. “Sewage Spill into River Was Latest of Many.” The Spokesman- Review, 14 July 2006, The Spokesman-Review, https://www.spokesman.com/stories/2006/jul/14/sewage-spill-into-river-was-latest-of-many/.