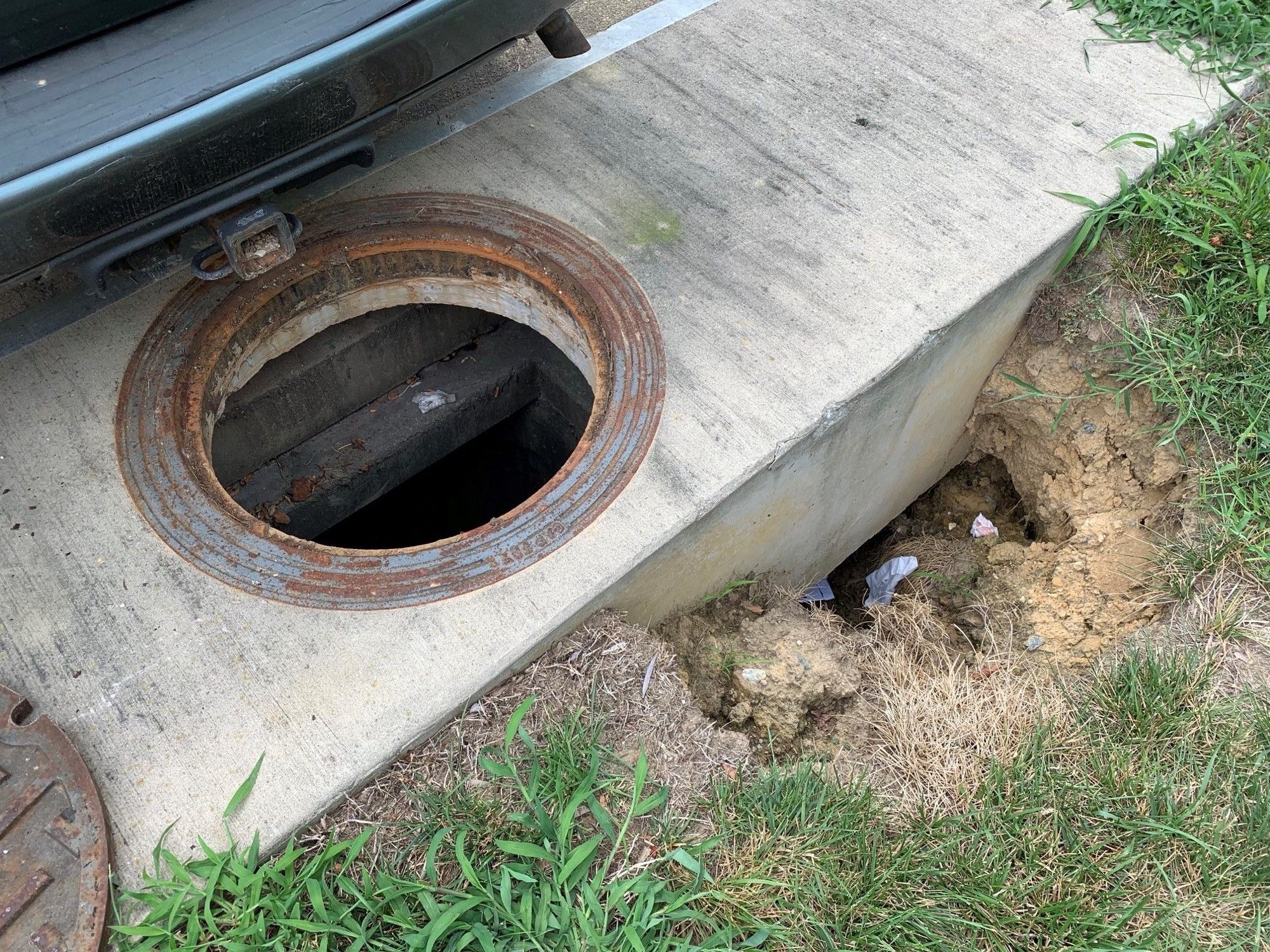 Sinkholes are a serious stormwater runoff threat, with damages to commercial property and loss of life that can result. Even seemingly small sinkholes that are left unattended can become a serious safety matter. AQUALIS’ stormwater professionals anticipate sinkholes throughout the country as the number of storms and rainfall increases due to the changing climate. It is essential to understand the causes and dangers associated with sinkholes and signs one is forming. In every case, identifying and reporting the deficiency early like a sinkhole is the safest thing to do. With that in mind, it pays to know what to do if you encounter a sinkhole and understand that sinkholes can have varying root causes resulting in the loss of soil that appears at the surface.

What is a Sinkhole?

A good definition for sinkhole is “any naturally occurring depression in the surface of the ground from which rainfall is drained internally.” In other words, when water is allowed to flow underground (outside of pipes), it displaces soil and can create a sinkhole above ground. Stormwater, water and sewer lines are buried underground throughout a community along roadways and near homes and businesses. Sinkholes can be caused by structural defects involving piping or other below-ground stormwater infrastructure that has become defective, improperly installed, degraded with age or has failed. Sinkholes can occur in both older and newer properties. A common structural failure in North America is from old rusted-out corrugated metal pipes (CMP). CMP-type piping is no longer accepted for use in many counties, but the legacy piping is still in place and degrading at multiple stages of its lifecycle.

How do Sinkholes Form?

Sinkholes can form in several ways including:

What You Should Do if You Suspect a Sinkhole is Forming?

AQUALIS is Dedicated to Root Cause Identification

If a sinkhole is suspected, AQUALIS uses several methods to determine whether failures of pipes are the cause. Methods include:

You are not alone in this problem. Aging infrastructure is a leading cause in creating sinkholes throughout the United States. Many communities are working to identify and repair issues that can cause sinkholes on the surface. Sometimes, you do not know you have a problem until that little concave spot appears after a storm. That is the first clue to look for and to investigate.

Catch basins are a commonplace of damages, including sinkholes. Therefore, when onsite for routine maintenance or inspection, AQUALIS’ localized teams examine catch basins to determine if there is a possibility of a sinkhole currently or in the future, assessing function, safety, and compliance.

There are three leading causes of sinking ground around catch basins:

Pipe inspections are warranted when a down-pipe issue is suspected. AQUALIS’ stormwater professionals and in-house engineers work on behalf of facility managers to evaluate site plans, areas of concern and identify any possible forming sinkholes. When deployed, remote-controlled crawlers with camera attachments can document issues and track distance so the exact location of concerns can be identified.

Please contact us to learn how our highly trained professionals can assist you in protecting your property from sinkholes with preventative maintenance and repairs.